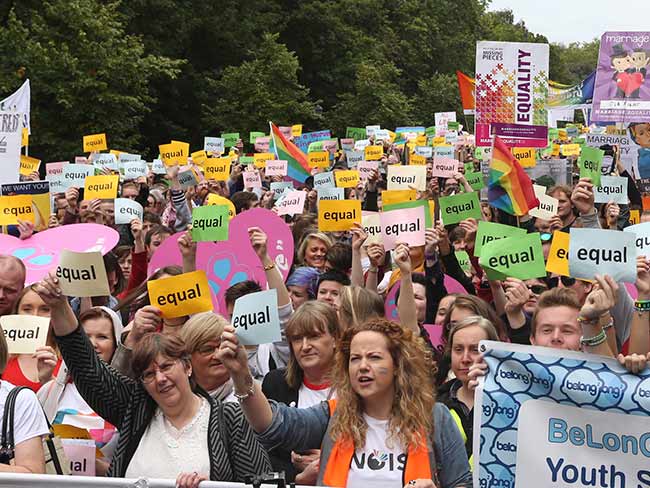 A Catholic group (We Are Ireland) are voting for Equality.

On the 22nd of May, Ireland will vote on wether to legalise same-sex marriage. I’ve been reading about the developments of it on the internet, and many people are voting Yes, while others, I’ve heard, mainly in the rural areas of Ireland people may vote No.

Unfortunately Irish expats can’t vote. I can understand in one way; we aren’t living in the country, aren’t paying any tax. But on the other hand, it’s still our country and we want to see it develop, we still want to be part of it’s future, whatever little way we can. Some of us may return home one day. Unlike some other countries, we are aren’t allowed to, but If I could I would vote Yes.

The thing is, the No people are focusing on the children of those who marry and are same-sex. Whilst with the Yes people, its simply allowing LGBT to marry. No are saying ‘but the children?’ It’s not right. It’s not fair on them.’ But how is it not fair for the LGBT community not to marry? That’s the real question. Some people might not WANT children.  So, if the vote turns out to be a no, then these people, who don’t even plan to have children, STILL can’t get married??

To me thats unfair. 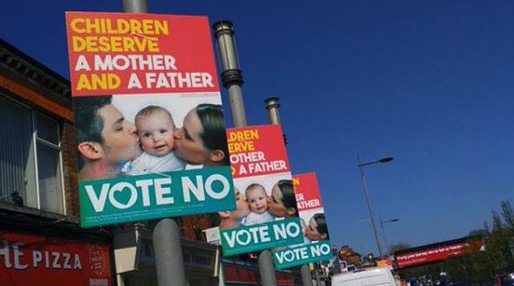 By the way, the couple in this picture did NOT know their picture was going to be used for these posters. They have also stated that they will be voting Yes.

Obviously at the moment theres no equality between same- sex couples and a man and woman marrying.  Not until this passes.

I think, once you’re happy, that’s all that matters, no matter who makes you happy.

I’ve been reading that people are concerned that there are the ‘silent voters’, and that the No side is creeping up slowly. I really hope it will be a Yes vote. Ireland needs to develop and stop being known as a backward country and being run by the ever present Church.

Of course the Catholic Church is in favour of a No, yet I’ve read that there is a priest who will be voting Yes, simply because he thinks everyone has a right to marry the person they love. It’s good to hear that people inside the Church think this way.

The government also supports same-sex marriage, which I am happy about. When I think about Ireland’s government I become annoyed, so when they are actually doing something which I believe is right, for once, I smile….but just a little.

In China, same-sex couples is still a taboo topic. The older generation frown upon it more, like Ireland’s older generation. But in Ireland, at least you can be open about your sexuality, whereas in China, the pressures of getting married and having children by their family, to conform to society, it makes it difficult for them to truly be themselves.

I’m sure, like in Ireland, China will open up more, and the younger generation will be able to express themselves more.

So I’m hoping, on the 22nd, Ireland will develop to become a friendly place to live, for everybody; regardless of sex!