For last weeks meeting on how to learn Chinese more efficiently, we were introduced to a new systematic way of remember both tones and the pronunciation.

It sort of involves a memory palace, where sets of pinyin like ‘iong’ are put into either categories like men, women, animation characters, or gods.  So far, I’m still confused with how you go about trying to remember how each pinyin is represented by one of these categories, so this week’s lesson will explain to us in more detail how it works.

I think it’s very clever way of memorising Chinese. God know’s It has been difficult for me.

They also gave us Anki decks where we have to pick a picture of someone, say George Clooney, and match him with a sound like zh. That way you associate that sound with a person.

To me now it’s still all a bit confusing, but hopefully in tonight’s class it will all become clearer!

As I keep saying, this Chinese really does do my head in sometimes. I put the effort in, but I just can’t see the results….

Some days I think ‘Whats the point??? Will I even use Chinese after learning it? Would I be better off just quit learning it and start learning Spanish instead?? Spanish will only take about 1 year to learn anyway.’

But this  thought keeps popping up:

Like so many other people, I quit a lot of things when  I was younger; Speech & Drama, tin-whistle, flute, dancing, singing, karate (although I can’t remember) learning French, among other things. Now I regret quitting all those things. I’m jealous that so many Chinese students can play the piano, I wish I could play it. But I know I probably would have quit at some stage.

So now, with the Chinese, I’m old enough to have some self-discipline. I want to prove to myself that I can do it. I want to meet my French teacher one day and say to her ‘Yes I can speak fluent Chinese.’ (I was the worst at French and there were only 7 students in the whole class)

I don’t want to add Chinese to my long list of regrets.

So I’m going to keep trying and trying and even more trying to learn this seemingly impossible language. And maybe one day it will all just click into place for me.

I need to stay positive with it and stop pressuring myself to be better than what I am. I’m terrible for putting myself down, especially for Chinese.

I just keep thinking ‘In another year  I’ll know more Chinese then I do now.’ Which helps a bit.

When I was in Ireland, I’ve never travelled to many places in Europe, mostly due to lack of money. Now that I’m in China and travelling around China (by plane) is quite expensive, I’ve now realised that I’ve wasted a lot of chances to travel around Europe; maybe visiting London for a weekend or strolling around Amsterdam. Maybe If I was surrounded by more people who actually enjoyed travelling, maybe I would have been more adventurous. I dunno, I just thought ‘All the places I want to visit will always be there’ kind of thing.

I do see myself going back home for a while, whether permanently or just temporary I don’t know… but I’ve promised myself to visit more countries in the EU…they are literally on Ireland’s doorstep!

But first, as I’m in China… both myself and my boyfriend want to travel to countries nearby us; Japan, Korea, maybe North Korea, Thailand……

Because I know when I’m done with China and it’s time to head home… there is a big possibility that I won’t be back… so I’d like to visit all these countries while I’m here.

I don’t want to regret it in the future!

Recently I’ve started to make more of an effort to loose some weight. Once again, my student called me fat ‘Aisling you are so fat’…. and at that particular time really upset up. I tried to explain to her that Asian and Western bodies are different.. but she just didn’t understand. She has told me numerous times that her Mum tells her she is fat… so that is where she has picked up her bad habit.

So since that upsetting experience I’ve made more of an effort to cut down on food and exercise more. Since returning from Ireland in January, I know I’ve put on some weight…. and recently I’m been feeling really down and self-conscious about it. Having to see teeny girls in short skirts showing off their skinny legs definitely makes you feel fat. And I know when they see me they think ‘Oh there’s a fat foreigner’. Just because I’m bigger than then.

In Ireland I’m definitely not fat, just average. Oh how I miss being average.

Also at work, there is a Chinese girl who I work with who thinks she is fat, and is on a diet and doing loads of exercise. But to me, she is DEFINITELY NOT FAT.  I think she has a lovely figure. I really do.  But the rest of her colleagues are stick thin… so she also has to be stick thin.

I really do enjoy living in China, but when you are constantly being judged on your weight, what you wear, and how rich you appear to be… it does take it’s toll on you. It does on me anyway. My accepting of myself and my body is definitely being pushed to the limit.

And to show you how obsessed the Chinese people are about being thin, here is an advertisement I found.

It says 想吃不想胖，喝。。‘Would like to eat but not get fat, drink…(name of drink)’

So it’s condoning not eating and becoming anorexic.

In Ireland, this ad would really make people angry.

Since arriving in Chengdu, I’ve visited Luodai 3 times now; the first was when I was on my teaching internship and my other teaching colleagues brought us. I actually think I did a blog about my first time there.

The second was when we went with two other friends from work…. we decided to go on a TERRIBLE day! It absolutely lashed and we were soaked to the bone. We arrived at Luodai but decided not to walk around it… the rain was just too bad. Plus we only had 2 umbrellas for 4 people. So we bought a few beers and headed back to Chengdu… 2 hours away. So that was a waste of a journey.

Chinese people love eating snacks, so you can try the strange food in the town, plus there are plenty of stalls selling ice-creams and drinks so you will never be thirsty! Most of the shops sell clothes, handicrafts and snacks. We decided to go and get our feet ‘cleansed’ by some fish… which was only 10元 for 30 minutes! So cheap!

For us, because we live in the south west of Chengdu, it took us about 2 hours to arrive. We took bus 10, then changed to 219. Luodai town is the last stop for 219 so it is quite convenient to visit.

Here are some photos of the great day! 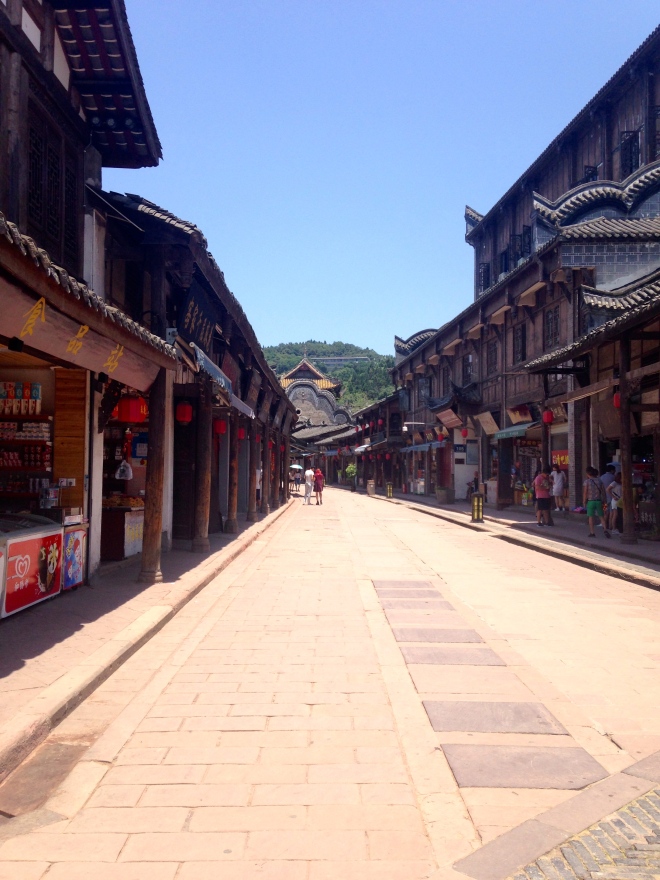 This is at the top, where we got caught by some ladies urging us to take a tour of the ‘Great Wall of Luodai’… basically a small wall replica of the one in Beijing.

Little fish nibbling and tickling my feet. Was so strange at the beginning but I soon found it quite relaxing. 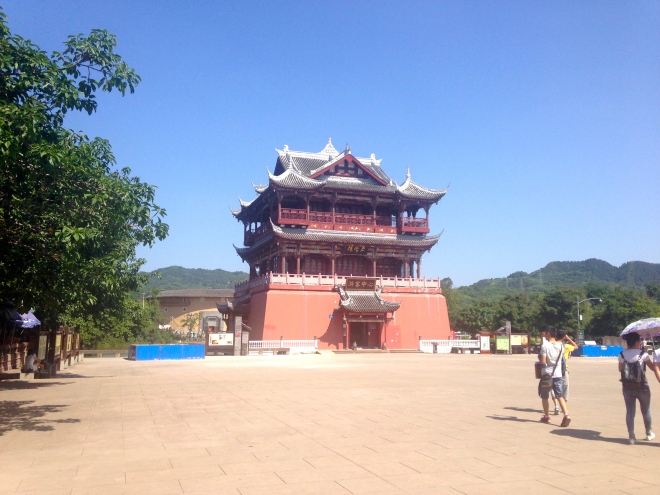 Luodai is a nice wee place to visit for a couple of hours if you are free. It is in the East of Chengdu, so it may take you more than 2 hours to reach if you are coming from the West.

I’ve mentioned in a previous post that I’ve started a 12 hour course in order to improve my method of learning Chinese. At the moment one of my methods is translating my textbook into English (or Chinglish), then re-translating it back into Mandarin. That way I can see if my translation is the same as in the book. But I’m obviously missing something.. as my Chinese still isn’t what I’d like it to be.

So last week was our first week of this 12 course we signed up to. Our first class we basically went through the phonics and tones.. easy enough. I’ve studied this in college already… but it is great to learn this stuff from a non-native person. The two guys that run the company know which phonics are difficult for foreigners, so they take a different approach in how we should learn it.

The most difficult ones for me are the ‘r’, ‘x’, ‘j’, ‘q’ sounds. They made an extra effort yesterday to make sure we were saying them correctly… ie showing us where to put our tongue when pronouncing these sounds.

Tone wise, I’m ok with these.

For homework, they gave us 100 cards of Anki, which we have to listen to and answer the correct pinyin and tones.

Oh, and I’ve found out that my college exams will be held next week! We have 12 topics altogether.. so my plan is to study 2 a day… ha but we will see how that goes!

I’ve recently become involved with a company called CoolTrip in Chengdu that offer trips in and around the Sichuan area. So I’ve started volunteering for a few hours a week in order for me to gain more experience in the tourism area, as some readers may know, in the future I want to work in the tourism sector. And of course for any type of job, you need experience…so I thought this would be a great chance to gain some! Every month here I will be posting trips that they will provide. So if you are already in Chengdu and are interested in joining one, or are contemplating visiting in the future, maybe check them out!

If you want any more information on any trip, you can contact me through this blog or through WeChat: aislinghoey1

Set up in August 2015, CoolTrip has become a go to company for both Chinese and expats to partake in adventures outside of Chengdu. Rafting, paragliding and tea-picking are just a few that they offer. Their first trip was to Songping Valley… and since then, they have been offering exciting tours.

For the month of June, they are offering longtrips to Seda and Songping. For adventures,  you can go rockclimbing, paragliding and rafting. Finally for leisure, you can go tea picking.

Below you can see more information on each activity. 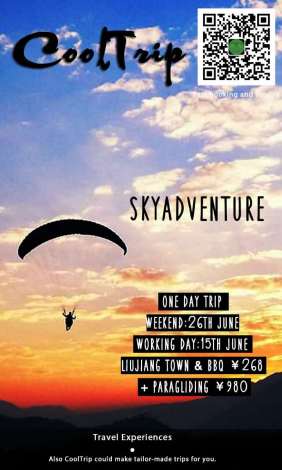 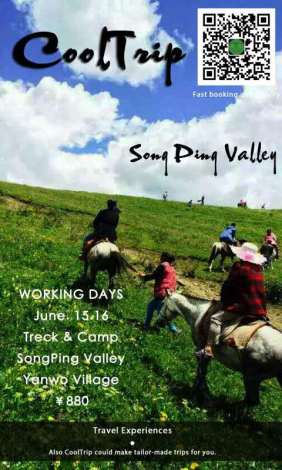 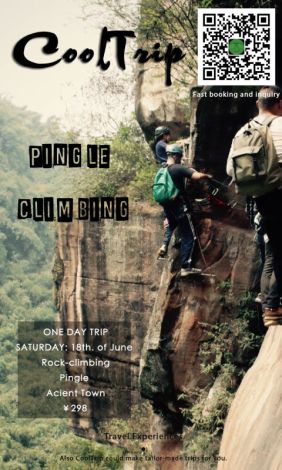