Photo by Guilherme Almeida on Pexels.com

When I was in Mexico, I would be looking at jobs in Ireland and I was amazed at how many there were that I could apply for. I was thinking ‘Aw it’s a pity I’m here and I can’t apply for any of them’

So now that we are back in Ireland, I’ve been applying and with no success at all. All the time spent away in Ireland I always thought ‘Whenever I go back to Ireland I’ll get a job ok. Things are different now and I have more experience’. I was a bit more positive back then.

Now that I’m back it feels like none of my 5 years working in China has benefited me at all. I’ve gotten experience all right, but not the right experience for the jobs I’m applying for. I can’t even apply for a teaching job because I don’t have a CELTA! So I’ve actually loads of experience teaching but I need a qualification to teach in Ireland. So unfair.

I just feel like we are in a rut. Yet Again. This time in Ireland. I’m trying to be positive though and keep busy; I’m still studying my spanish. I know my speaking has gone down though, but I think my verb conjugations are improving and I’m continuously learning new words. So that’s good. Also I do enjoy being with my family. I was very lonely in Mexico so now that feeling is gone and I’m enjoying my time here. We have our own space in the garden in an old mobile home that we live in now. I said I’d post about that one day and I will. The shower doesn’t work so we have showers in my parents house (which I don’t mind at all), and we need to get gas for the cooker, but apart from that everything is great. Well, in the winter it will be absolutely freezing because there’s no insulation at all and we only have a small gas heater, but we’ll worry about that when we get to it.

We also got the internet hooked up from my parents house so now we have our small TV and we can watch Netflix which is great. So I do enjoy having our own space and at the same time I can also be with the family.

I was just surprised at how difficult it is to get a job. Even my husband was surprised, and he has been applying for loads with no success. My Dad always says “Everything will work out”. But my answer is “When will it work out?”.

I don’t exactly want to wait 5 years for ‘everything to work out’.

About a week ago, my new nephews received two balloon dinosaurs. They have stick on legs and a cord so when you pull it they look as it they are walking.  The oldest one got a T-Rex and the youngest got a Brachiosauros (the one with the long neck).

So they were playing with them and what not, until the youngest broke off one of the legs off his. They would have to stick it back on but of course it wouldn’t last as the youngest just loves breaking things. (He once got a PJMasks figurine that talks and within an hour of getting it he put it in the water and wouldn’t work. Amazingly it was ok after being beside the fire).

Of course everything doesn’t last, and now both of the dinosaurs were legless and were floating between the bathroom and the sitting room on the roof for the past few days.

So the next day we were cleaning and we had both the front door and the back door of the house open to let in some fresh air. I was sitting across the house in the mobile home that myself and my husband are living in for the time being (I’ll post one day about our move), and I look out the window and I see the Brachiosaurus dinosaur floating outside the house!

I start shouting ‘F*CK F*CK!!’ and I start frantically running outside. My husband is thinking “Oh god something must have happened to her Mum or Dad!” and he jumps up too, until he looks out the window and sees it. I run outside as the balloon is gently floating through the garden, getting higher and higher. I get to it, but it’s too late. The Brachiosaurus is out of reach, as it serenely floats higher and higher and over the field behind our garden….. until it’s just the shape of the brachiosaurus that could be seen.

Myself, my husband, my Mum and Dad all just stood in the garden looking at it as it floated away into the clouds, while I was thinking “Oh god, my nephew is going to be so upset when he finds out it’s gone…”

It must have came out of the front door and floated down the side of the house into the garden. It was very funny though…but I can imagine if my nephew was there he would be distraught!

The T-Rex is still floating in the house though… so we’ll see how long it lasts until his bid for freedom. 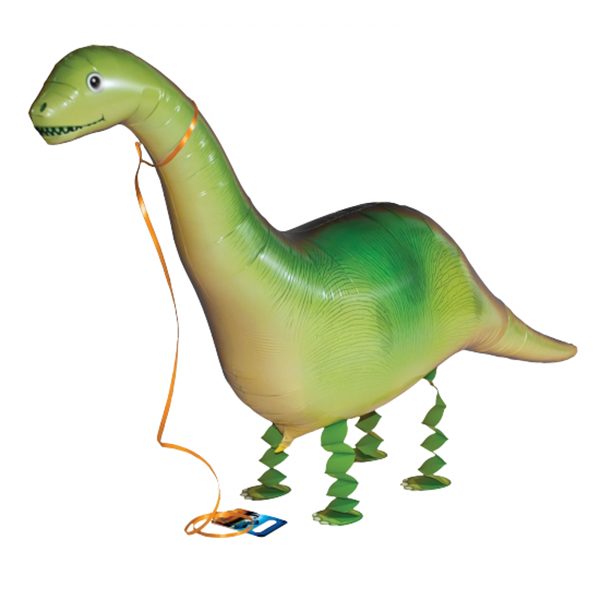 The Dinosaur that escaped Source; google

So now that I’m back in Ireland I have been looking at jobs that I’d be interested in in and around Dublin. I’ve been thinking about whether I should do a tourism course near me or If I should just apply directly for jobs. I don’t have the experience or the qualifications so I was thinking if I at least get a qualification in something then that at least will help me.

Anyway, I happened to come across a website that were looking for travel agents, so I said well I may as well apply and just see what happens! Apparently they are a good company to work for with good benefits and all that, so I filled out their application form and then just waited for an email.

I got an emailed back and they wanted me to do a mental agility test. I’ve never heard of this before so I didn’t really know what to expect. They said that I had 50 questions and I had to answer as many of them as possible in 15 minutes. So I started and honestly I didn’t really have a clue what I was doing! Maths, reasoning and comprehension are included in it and there are 5 ( I think) choices to choose from. You have to add maths quickly (I am atrocious at maths), another one is that you have to choose what the second letter of the last word is and then write it down of a sentence that is jumbled up. Then there was an example of ‘ Mansion is to hovel, as house is to…..’ and you had to click out of 5 possible answers which one ‘house’ is to.

I finished all of them but I didn’t have enough time to recheck them again. On all the Maths one I just guessed them because I didn’t have a clue! So then again I waited for their reply, not expecting anything to come out of it!

And…. I was right! I got an email a day later saying that my score wasn’t high enough. So that was that. I wasn’t annoyed or anything that I didn’t get through, I think I was just a little annoyed that apparently to them, I wasn’t clever enough to even have an interview with them.

I know I’m not good at maths, I know that. I’m perfectly aware of it; I don’t want to be an accountant, I wouldn’t even dream of it because I know I’ll never have the maths skills to do it. I just don’t feel it’s fair to be made answer maths questions and be judged on your answers because of it. So half the scores were low because of my bad maths.

Maybe I’m totally wrong and these tests are very effective, but in my opinion I don’t think so. I was already at a disadvantage with having bad maths, and I don’t think that’s right.

And anyway, this position was to become a TRAVEL AGENT. Not an accountant, not a lawyer, not a surgeon. Like come on, I think it’s a bit much just to be a travel agent.  The company also makes potential employers have a 40 minutes telephone interview, then another interview in their company, THEN another geography and maths test! So even if I did pass their mental agility test, I would have had to do another maths test anyway!

So maybe it was good that I didn’t get any further in their rigorous job application for the extremely demanding, difficult, life saving job of being a………