While in Madrid, we visited a really pretty place called Toledo! Apparently on wikitravel, it says that although it’s nice, it’s very touristy. When I read this I was put off by it. Too many tourists often ruin a site. But when we arrived in Toledo, we were very impressed by it! 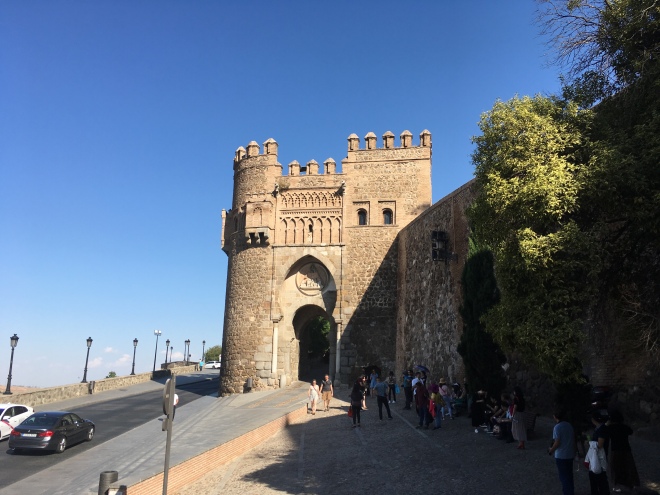 Yes there were tourists, but when you start walking down the many small alleyways, the tourists disperse for a while. I have to say I really liked the whole place! It’s an ancient city set on top of a hill and in the olden times was surrounded by a wall. Some of the wall can be seen today. There are quaint shops, beautiful old buildings, and I loved walking down the narrow alleys and seeing what we would come across. In the olden times, the Jewish, Muslims and Christians all lived within the walled city in their own areas. You can walk around each area and see the differences in each one!

So how we got there was we got a bus from Madrid bus station which was about 45min/1 hour to Toledo. Then from there we walked up to the old city. 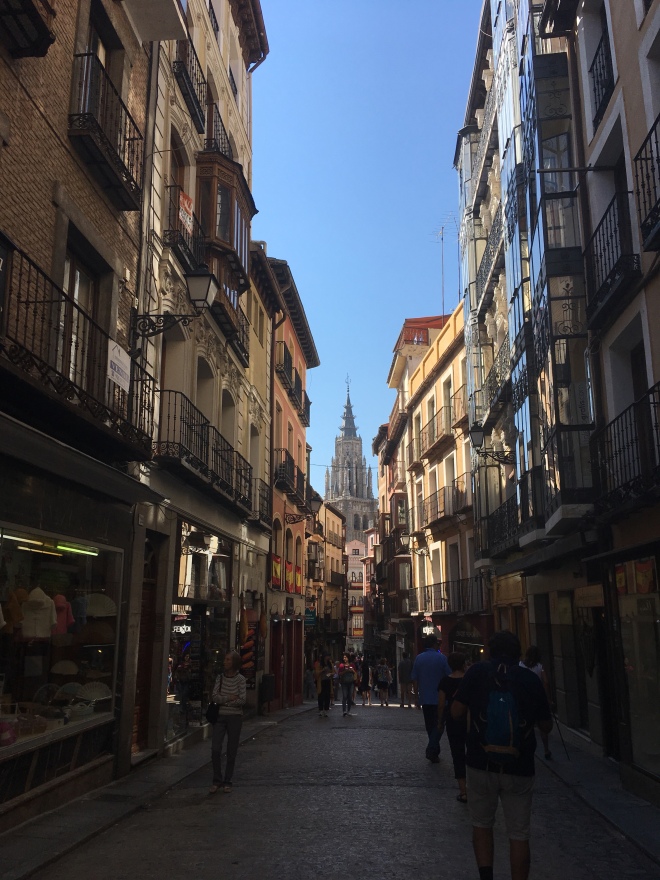 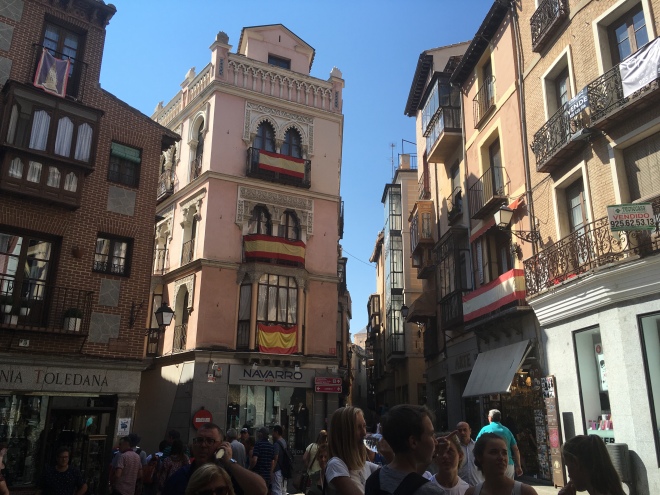 While we were there, we took a small train (it’s not really a train but just a small bus that looks like a train with an open top) and it took us around the area and out of the city so we could take some great photos of the whole city from afar. I would suggest you do this as it’s the only way to get a great photo of it. They stop for 5 minutes for you to get out and take your photos.

If you plan to go, I would advise to go during midweek rather than the weekends. When we went it was pretty busy already and that was on a Tuesday.

But yeah, definitely make a stop to this pretty place if you are ever in Madrid!

After my lovely stay with my family, we’ve moved on to Madrid, where we will be here for 10 days. My fiancés parents are also here so we are spending time with them checking out the city. I didn’t really know much about it but from what I’ve seen, it’s very pretty. I especially love the buildings. There are lots of parks to walk around and there hasn’t been one cloud since we arrived!

Of course now I’m not used to the sun after spending time in Ireland, so it’s making me tired. We usually go for a nap when the sun is at it’s hottest, and then head back out when it’s a bit cooler.

Now that I’m in Spain, I can really notice how their Spanish accent is different to the Mexican one. I prefer the Mexican accent, it just sounds better I think. (Of course being with a Mexican is making me biased) I also realised how fast they speak! Ah how am I ever going to understand them!? I just zone out when I hear people speaking. I know I should try and listen, but when I can only understand/hear one word  in a whole sentence, then that is what makes me not bother!

But yeah, so far I’m enjoying my time in Madrid!

The University where I worked at

It’s strange to think that this is the first September that I’ve been in Ireland for 5 years. Every September I’ve been in China. It’s not very significant but it means a lot to me. It’s change, and that’s good.

This time last year I started teaching University students. I was making PPT’s for them and getting used to waking up at 6:30am, work at 8am. I was trying to learn all the students names and where my classes were for teaching every class. Little did I know that in a years time I would be at home enjoying time with my family and getting ready to go to Mexico. It’s a nice feeling to know that my life has changed (in a good way) from 12 months ago.

As for teaching and after my crappy students from last semester, I’ve gone off teaching altogether. I really want to try something new. I’m really fed up of teaching now. The students did a good job with that!

I think private teaching would be ok in the future. When I worked in a private company I had some great students and I really enjoyed their classes. But first I’ll try and do something that I want do, and then maybe for extra income I could work teaching privately. It’s good to know that I can fall back into teaching if everything else fails. (which I’m sure they won’t)

But yeah, it’s just a great feeling to know that things are moving now. I’m not stuck in China teaching yet again, for another year. I can start to learn Spanish, I can start looking at jobs I want to do, I can start doing things that I just couldn’t do in China.

Even making friends, I hope I can make new lifelong Mexican friends in Mexico. In China, we made friends and then lost them…. as everyone moves away eventually. So it’s hard to meet and keep in contact with people, especially in China.

I have to think, what will I be doing this time next year? I’ll most likely be in Mexico. Will my Spanish be good? I hope I’ll have new friends. I hope I’ll be living in an apartment. Ha I’ll push the boat out and hope I’ll win the lotto and be rich.

While I’ve been home in Ireland, there are more and more things that I notice every time I come back. Here are a few since I came home.

There really are 4 seasons in 1 day

In China, it’s either sunny or cloudy/smoggy and there is little change during the day. In Ireland, in the morning it could be sunny, at noon it could be cloudy, in the evening it could be sunny and then all of a sudden rain would appear, and then maybe it will be cloudy again. It really does fluctuate here, and I’ve never realised how much it does until I came back here. So you really do have to have an umbrella and coat with you!

Having lived in Chengdu which is very very clean, and then travelling around Japan, which is also spotless, I arrive in Ireland and there’s rubbish everywhere. A bottle here, a crisp packet there….. It’s only now that I realise how dirty it is. While we were in Dublin, I saw two dead rats on the pavement (plus loads of rubbish). I admit I feel quite ashamed of the state of my own country. Why do people think it’s ok to throw rubbish instead of just putting it in the bin? I’ll never understand it. But yeah, unfortunately Ireland is very dirty in comparison to Chengdu and Japan.

Having moved from Ireland 5 years ago, I’ve noticed many more different ethnicities here. Even in my small town of 40,000 I’ve seen many more. (I really don’t understand why they would come to where I live, there’s nothing to do here!) I don’t see a problem with them coming here once they contribute to society and not just arrive to receive social benefits. Also in Dublin I’ve seen a lot more tourists about! It’s good to see but I can see in the future that the city won’t be able to handle the big influx. Dublin isn’t a very big city at all, so I feel there may be problems in the future.

I was looking at the prices of sweets in shops, and a lot of small bars are like €1! Just for a chocolate bar! I don’t know whether I’ve just never noticed when I lived here before, but I really don’t remember having to pay €1 for a bar. Maybe 70cent. But yeah, I do notice things are expensive here. (Cry)

Again, I’ve noticed that there are many bigger people here. Maybe it didn’t register when I lived here before, but I feel there are more people that would border on being obese than before.

My house is literally 5-10 minutes away by car from the town centre. It’s really close but yet I need a car to get there. There are no pavements on my road until closer to the town, and I wouldn’t feel safe walking on the road (it’s quite busy), so the only way to get there is by car. There are also no buses.

It’s actually quite annoying. My fiancés parents also said that they wouldn’t like to live here because you need a car. So it’s nice to live in the countryside but that means you will need your own transport to get around. The transport system here is crap, and unless you live in a big city like Dublin then you need a car to go pretty much anywhere.

I’m sure there are more that I can’t think of right now. It’s nice being with the family though. I love going to bed in my own bedroom and sticking something on to watch while I’m surrounded by all my own things. I couldn’t do that in China.